No news is good news!

It has been a while since our last update – but there is a reason for that!

It was proving difficult to find a site for the Memorial Orchard within Weaverham village itself when the Woodland Trust came to our rescue and offered us a plot of land within Thorn Wood, on the Northwich Road just outside Weaverham.

The orchard, just to the right of the path that runs diagonally from the entrance, is an L shaped plot of land with an area of 0.37ha ( just under an acre ). 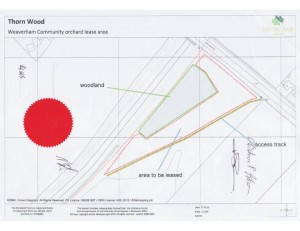 This is a much larger area than we had originally hoped for, and certainly larger than any we could have found within Weaverham itself.  As a result we will be able to plant a lot more trees than we originally thought; now we can plant not just Wareham Russets but also as many other old Cheshire varieties as we can find.

Now this will become an amenity not just for Weaverham, but also for all the surrounding communities – Hartford, Gorstage, Bryn , Cuddington and Acton Bridge – all of which used to have a tradition of fruit growing,  of which now only a few vestiges remain.

We hope this Memorial Orchard will become a reminder of this area’s apple, pear and fruit growing heritage and will help to preserve, for everyone to taste and enjoy,  many old varieties once commonly grown around here. 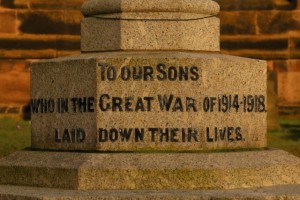 This Orchard is established to mark the Centenary of the First World War – the Great War of 1914 to 1918. We trust that this will be a fitting memorial, not just to those Weaverham lads ( who took their nick-name Russets  from the local apple ) who fought in that war, but also to  all those from the surrounding communities and to those who fought in the Second World War and subsequent conflicts – particularly those who were killed or injured (physically or mentally).

te. In due course the terms of the 25 year lease were negotiated,  approval for use of land designated as a public amenity sought and obtained from Cheshire West and Chester, and both Weaverham and Hartford Parish Councils consulted.

But while this was going on we did not waste our time. Whilst the lawyers were working on the details we took cuttings from an old Wareham Russet apple tree and had them grafted to 50 new root stocks.

The lease was signed in December 2015, the deal completed in January ready for the trees to be planted this February.

We have now planted 43 trees – in addition to the 34 Russet grafts that took, we bought five Lord Derby apple trees and four Minshull Crabs. Each tree is supported by a stake and protected by wire mesh.

Millicent Barnes – these will be ready for planting in July.

For the future, with Trafford Drive Allotments Community Orchard as our first source of scions, we wish to acquire the following Cheshire apples; Eccleston Pippin, Lord Clyde, Rakemaker, Surecrop, Withington Welter, Bee-Bench and any others which come to light.. We have also resolved to have Hazel Pears and Cheshire Damsons in the orchard 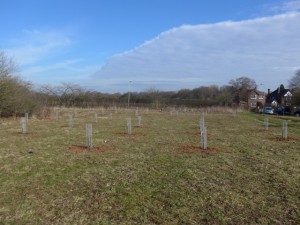 There are more pictures of tree planting in the new orchard in the photo album.

There are many people and organisations who have given grants, support, help and advice.