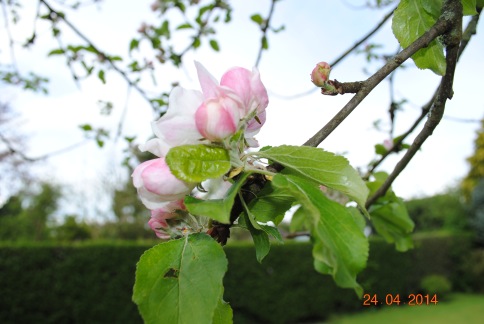 The Wareham Russet:  A russet is an apple with a rough skin and grey ‘netting’ over the main colour. 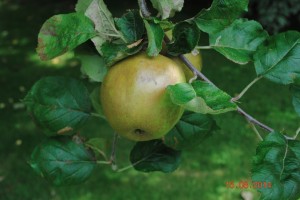 The Wareham Russet apple tree was certainly known prior to 1820.  Wareham is an old pronunciation of Weaverham and residents are nicknamed Russets because of the apple.  Those who left Weaverham village in order to fight in the two World Wars were Russets including many who are mentioned on the village War Memorial outside St Mary’s Church.  At one time there was a large number of orchards in Weaverham growing Wareham Russet apple trees alongside damson trees.  After the 2nd World War the orchards in Weaverham were all grubbed up in order to build houses and eventually there was only one tree left in the village.  Tony Gentil of Reaseheath College, an apple expert, asked the owners if he could take scions from the tree and graft them onto rootstock in order to preserve the variety.  By 2013 there was only one old tree and three grafted from it known to be in existence.  The old tree was not only verified by the late Tony Gentil but also by experts at the National Apple Collection in Brogdale.  Other old trees in the village have been tested but have been shown not to be Wareham Russets.  When we have completed planting the Memorial Orchard there will be at least 60 Wareham Russet apple trees in the orchard and others will be planted around the area e.g. at Mere Brow Farm, in school grounds and private gardens

Minshull Crab:  A full sized cooking apple from Church Minshull that has been known since before 1760.  It was sent to market under the name of Minshull Crab.  A crab denotes an apple that will often keep well.  This is a hard apple with a sharp flavour that keeps its shape when cooked.  It was widely grown for market in Manchester and other cotton towns where it was also called the Lancashire Crab.

Lord Derby:  Raised in Cheshire in 1862.  It is a green, smooth, slightly acidic apple and is regarded as one of the finest cooking varieties.  It requires little or no sugar when cooked.  It should be picked in mid-September and can be stored until December.

Arthur W. Barnes:  An attractive and popular mid-season cooking apple bred from a cross between Gascoyne’s Scarlet and Cox’s Orange Pippin by N.F. Barnes in 1902, the head gardener to the Duke of Westminster, and named after his son.  It is very versatile in the kitchen and cooks to a puree.  It does not keep well once harvested (mid Sept).  Arthur Barnes was killed in the First World War and his grave is in Eccleston churchyard near Chester.

Millicent Barnes:   An apple also developed from a cross between Gacoyne’s Scarlet and Cox’s Orange Pippin by N.F. Barnes in 1903, the head gardener to the Duke of Westminster, and named after his daughter.    It is a dessert apple.  Millicent Barnes, later Millicent Witter lived on the Wirral.  The Barnes family lived on the Duke’s estate at Eccleston

Betley Bee Bush:  Originated on the border of Chehire and Shropshire and is sometimes considered to be a Shropshire apple whilst others say it is a Cheshire variety.

Bee Bench:  This dual purpose apple was first exhibited in 1934 and comes from an area covering Crewe, Nantwich and Market Drayton.  The apple’s name comes from the Victorian habit of placing bee skips in their orchards so that the insects would aid pollination.

Eccleston Pippin:  This dual purpose apple keeps its shape when cooked.  It should be picked in mid-September and can be stored until December.

Lord Clyde:  Originated in Stockport in 1866.  It is a cooking apple which should be picked in early October.

Sure Crop:  Originated in Altrincham in 1905.  This cooking apple, which should be picked in mid-October, can be stored until November/December.  It has a very sharp flavour and keeps its shape when cooked.

Withington Welter:  Dates back to 1883.  It is a tasty dual purpose apple which cooks to a fluff.

The Hazel Pear:  One of the commonest pears in Acton Bridge and long associated with the village.  Often called the Hessle Pear, at one time the fruit were known as ‘toadbacks’ because of their resemblance to the skin of a toad with brown skin and black dots.  In the First World War it is believed that, like many pear varieties, Hazel Pears were shipped to Manchester in order to produce Khaki dyes for uniforms.

Cheshire Prune:  Often called the Cheshire Damson.  This variety is commonly grown in Cheshire.  It is used for cooking and was previously grown in the old Weaverham  village orchards alongside the Wareham Russet.  The tree produces a small black fruit with a true damson flavour and is self-fertile.