So far 2020 has been a strange year. Until the lockdown we were able to continue the work we started in 2019: re-staking trees and planting a few new ones. 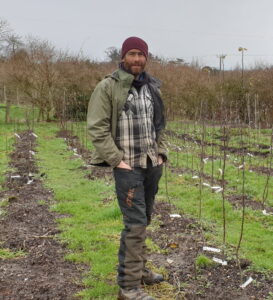 We are grateful to Tom the Appleman who grafted some scions onto rootstock for us. He also grafted some Wareham Russet scions to sell in his fruit tree nursery thus helping to spread the area in which the variety is grown.

In 2019 we continued our efforts to eliminate, or at least reduce, the number of ragwort plants growing in the orchard. We repeated our trial of a new method of eliminating the plant by removing the flower heads just before the seeds were due to fall. Some studies suggest that pulling ragwort often leaves fragments of root behind, each of which becomes a plant.

We are grateful to The Co-op Community Fund and to the many Co-op members who have chosen The Memorial Orchard as their local good cause so that the orchard can receive 1% of everything they spend. We have already received a half term payment. Co-op members will be able to continue supporting us until October. Details are on our website.

In order to comply with the necessary social distancing rules to avoid the spread of Covid-19 we are holding this year’s AGM on Zoom. As we were forced to abandon our regular group workdays at the orchard for the past three months it seems a good time to look at our aims and reflect on what we have achieved since our group was formed following a public meeting in December 2013 as well as looking at progress made in the past year.

To establish an orchard in memory of those who served in two World Wars and in more recent conflicts.

This year (2019-20) we planted our last few Wareham Russet apple trees, some Cheshire Prune trees (damsons) and some Hazel Pear trees thus completing our planting plan. We held a Service of Dedication and Remembrance in 2016 and a Service of Remembrance in 2018 to mark the centenary of the end of The First World War. 2020 marks the 80th anniversary of Dunkirk and the 80th anniversary of the Battle of Britain, as well as the 75th anniversaries of VE Day, VJ Day and the official end of the Second World War on 2nd September 1945. To mark these anniversaries, and thanks to a grant from our local CWaC councillors, we scarified land around the bush Wareham Russet trees and scattered English wild flower seeds in memory of those who served in the Second World War. We will continue to lay wreaths on Armistice Day each year. We continue to find out as much as we can about those local men and women who served in these conflicts and welcome any information that anyone can provide.

To commemorate the centenary of the First World War.

Our group first met in 2014, the centenary of the start of WW1 and we held a widely attended Remembrance Service in November 2018 to commemorate the centenary of the end of that war. We have an ‘In Memoriam’ section on our notice board on which we frequently remember local people who served in WW1 (as well as WW2). 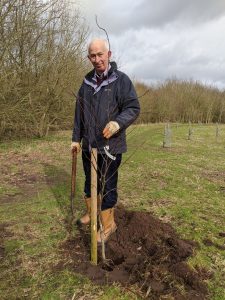 In October we received a contact form message from Charles Cottle. Sgt Thomas Moreton Gandy MM of Acton Bridge was killed on 14th March 1916. He was a cousin of Charles Cottle’s maternal grandfather. Charles offered to help us plant Hazel Pear trees last autumn and gave us a donation – it was good to have a distant relative of a man mentioned on a local memorial volunteering at the orchard.

To save the Wareham Russet apple tree from extinction and to grow it alongside other Cheshire heritage fruit trees.

We have planted approximately 150 Cheshire heritage apple trees almost half of which are Wareham Russets and we are grateful to those who have grafted the scions onto rootstock for us. In the past year we have also planted two Cheshire Prune/damson trees and two Hazel Pear trees. We have now completed our planting apart from replacing any failed or damaged trees.

To plant additional pocket orchards of Wareham Russet apple trees in the locality.

To provide an amenity for Weaverham, Hartford and neighbouring communities.

Before the lockdown the orchard was frequently used by local people many of whom made use of the benches to enjoy a picnic. On our infrequent visits during the lockdown people we spoke to from a distance told us they were still enjoying walking there. Since the lockdown has been relaxed we have received correspondence from some of the vulnerable, previously isolated people who, now that they are allowed outside their homes, are visiting the orchard as it is easy to maintain social distancing. They tell us that they enjoy stopping for a picnic in a safe environment.

To facilitate educational and social events

So far we have hosted two Services of Remembrance and welcomed cub and primary school groups to the orchard. When the trees are more mature we intend to invite more schools and other organisations to the orchard and to cooperate with teachers as part of the education programme. We also intend to hold social events such as wassailing, spring picnics, and Apple Days.

I trust the above review assures you that we have achieved our first five aims and that we have partially attained our sixth aim. We cannot hold big social events until the trees are more mature but we will do our best to organise them in the not too distant future.

I will conclude by thanking all those who have worked so hard to make this possible, beginning with The Woodland Trust who leased us the land – particularly Neil Oxley for all his support and encouragement. I would also like to thank our local CWaC and parish councillors for their moral and financial support. We are all very grateful to Brian Williams for planning the planting scheme and organising work at the orchard. I know it has taken up a lot of his time and energy. I am grateful to our hard working volunteers particularly Geoff Hornby who, until the lockdown, joined our action group members at the orchard every week often in adverse weather conditions. My thanks also go to Rob Lloyd who has frequently volunteered at the orchard. We are grateful to those walkers who have been picking up litter when we have been unable to work at the orchard. I would also like to thank Fiona for looking after our Facebook page and Steve for updating our website.

I really must thank our Action Group members who work tirelessly in many different ways both at the orchard and behind the scenes: Fiona Casson, Steve Doughton, John Freeman, Mike Hornby (secretary), Peter Sayers, Brian Wiliams (treasurer) and Jacquie Williams. I know that some of them have been returning to the orchard on odd occasions to work alone during the lockdown. Following the easing of lockdown restrictions some of our sturdy volunteers retuned to the orchard on Tuesday, 23rd June for the first weekly socially distanced workday.

Finally, my thanks go to all those attending the Zoom AGM and I trust you will continue to support us for many years to come.