95 year old Ernie Nelson is a Second World War Royal Navy veteran who played an important role in the D-day Landings.  Ernie has lived in Hartford for the past 32 years although his home was in Rudheath during and after the war.

This year he has taken part in the 75th Anniversary commemorations. The Guardian wrote:

Ernie Nelson, a 95-year-old veteran from Cheshire, said it was “first class” to be back in Portsmouth for the 75th anniversary.

“A lot of memories come back to me, that’s the trouble,” he said. “I get flashbacks, I remember the people I was with at that time.”

He was a wireless telegraphist on HMS Scourge – part of the 23rd Destroyer Flotilla. 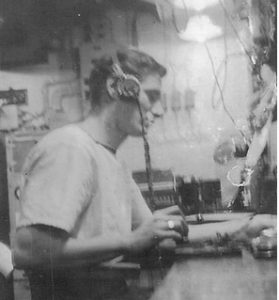 Ernie in the wireless communications room.

He completed 12 Russian Arctic convoys in a period of 2 years, described by Winston Churchill as the worst journey in the world.  When the Convey JW55B was attacked by the large German battleship Scharnhorst HMS Scourge and one of her sister ships stayed with the merchant ships.  Ernie was listening to British Admiralty messages for the entire duration of the Battle of North Cape until the battleship Duke of York finally sank the Scharnhorst. 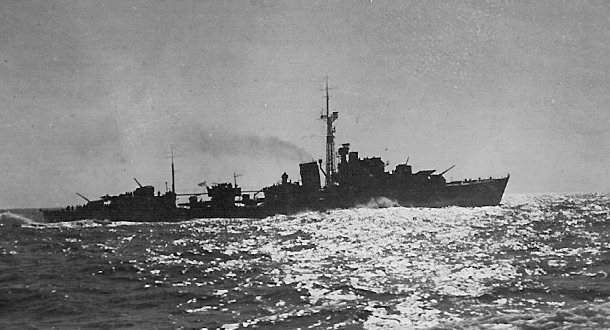 HMS Scourgewas one of seven ships in the 23rd Destroyer Flotilla which set off from the Isle of Wight and spearheaded the D-Day landings.  Two of the seven ships in the flotilla were sunk.  The Scourge performed a key role during the D-Day Landings including protecting the minesweepers cutting a passageway through the German minefields. This meant travelling at a speed of 3 knots with two minesweepers either side and mines floating dangerously close to the destroyer.  Classed as essential staff, 20 year old Ernie had to stay below deck whilst most of the crew were ordered on deck for their own safety.  HMS Scourge and HMS Saumarez also bombarded Omaha Beach in order to support American troops.  The two ships also bombarded Gold beach and came under air attack from two German Junkers 88 dive-bombers.  Ernie’s ship was involved in many other operations during the D-Day Landings including the bombardment of Sword Beach.

Ernie served nearly 12 years in the Royal Navy and was also awarded a personalised Palestine War silver medal.  He has the French Legion d’Honneurmedal for D-Day and the Russian Ushakov medal for Russian Arctic Convoys.

Sadly, Ernie’s wife died 5 years ago.  They had two children Susan and David, three grandchildren and one great grandchild.