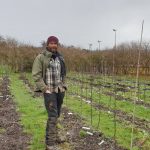 In 2014 the Woodland Trust offered us almost an acre of land in Thorn Wood on which to plant our orchard. After the lawyers had worked on the details we eventually signed the lease in November 2015 and we are very grateful for the support given by Neil Oxley of the Woodland Trust who has […]